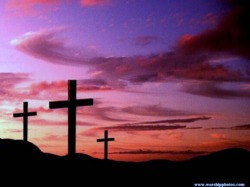 Jesus Christ is the Son of Almighty God. Born of a Virgin, conceived by the Holy Ghost as He overshadowed the Virgin Mary. He lived a sinless life of 33 years, taught 12 disciples which later on, 11 of them became apostles and the forefathers of the Early Church. Jesus was chosen by God to be the Supreme Sacrifice for all mankind. Jesus Christ is not a prophet, that he would create ideas for salvation and then die a human death. Neither was He murdered for heresy. Jesus Christ gave Himself, willingly, to die upon the cruel cross of Calvary, thus carrying the sins of whole mankind upon His shoulders. Each precious drop of blood He gave was for our freedom and redemption to be reunited with our Father God in Heaven. He cried to the Father; "Forgive them, for they do not know what they do". Not only was that for the benefit of those who nailed Him to the tree, but for each one of us, past, present and future. Three days, He remained in the grave. On the third day, however, at daybreak, Jesus Christ arose out of the grave victorious. Forty days He walked upon this earth, instructing his disciples about future times, the church and missions. Then He arose to the Father in Heaven. Jesus Christ, one day, will return again to claim His Bride, which is the Church, the Body of Christ. He will Defeat Evil and usher in a New World. 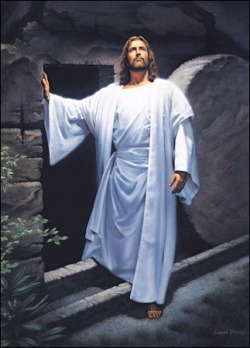 He was in the world, and the world was made by Him, and the world knew Him not.  He came unto His own, and His own recieved Him not.  But as many as recieved Him, to them gave He Power to become the Sons of God, even to them that believe on His Name.  Which was born, not of Blood, nor of the Will of the Flesh, nor of the Will of Man,  But of God.  And, the Word was made flesh, and dwelt among us, and we beheld His Glory, the Glory as of the only Begotten of the Father, full of Grace and Truth.